Drove over last night and slept in the vans, just out from Betws-y-Coad. Decided last night to do the recce on my own so could have a lay in. Also I’d forgot my running top and didn’t want to look stupid 🤔. Found a place for breakfast just up the road, had a couple of teas at the van, while it opened. Had breakfast and Phil went off biking and I went to Betws-y-Coad to buy a top. Found a Cotswolds shop and a nice Fox top in the bargain rail, Boom! Parked up and got ready for my run. It’s been raining all night and still raining now, 11:30am I start running. Through Betws-y-Coad village,down to the river and straight on the technical single track, lovely. Think I go wrong now and then but I don’t mind, this is wicked.

Gets really muddy and dodgy in placed but great fun. I get to Swallow falls which if I’m honest, takes my breath away. Wasn’t expecting this.

Carried onwards and upwards,around fire roads. Not many people around this bit.

Finally come out of the woods and find the main path. Into the open and I can see Grampian, where I’m heading.

Phil calls me, “my bikes packed up and I’m in the middle of nowhere” which I replied “so am i”. Phil has a full suspension electronic powered bike. So heavy and not much fun without power. He cuts off muttering something about Google and I carry on. Following a good path now and loving it.

I can see Grampian, which i need to go up. I worry about going to far down the path, so just head straight up. Well! What a mistake! I reckon I took the worst possible way up. Boggy, no path, slippery rocks and spikey bushes. I’m so stubborn I just kept going. It seemed to take a lifetime but I eventually got there. I also spotted and joined the path (I should have took) to the left, which I should have been on to the top.

Ate some food and headed off north. I kept getting a glimpse off the lake I’m heading too, so aimied that way. Only to keep coming up against big drops, rocky ones. I did most of them but now and then I turned back. At one point I crouched on the edge to jump. Only about 3 foot but onto another edge with thorn bushes either side. What was I thinking? Had a word with myself and retraist my tracks. to be fair there wasn’t much running, too boggy and too dodgy. Here’s some pics of the next few miles. 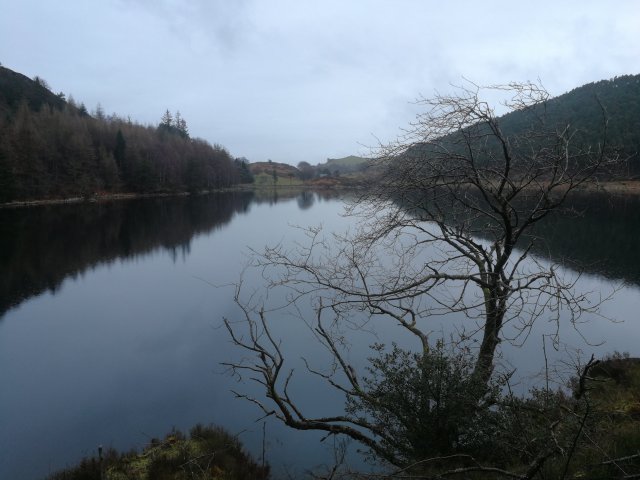 Absolutly beautiful place and will coming here more. Had to negotiate the worst single-track ever along the last lake. The path was full of roots and could hardly walk most of it.

If I’m right this will be coming after 40 miles, carnage! Got to the end of this and started to get back in the flow. Just got going and Bang! Straight to the ground. Went down so hard on my knees. I couldn’t move,I was sat in a puddle growning. This is it, the end of my run every day. I feel gutted,then helpless. What will I do? I’ll tell you what I do, I get up. It hurts, alot. so I walk a bit, not so bad only pain. I start to jog, nothing serious only swelling and a slight cut. I never really brouse or anything, so no war wound.

Now I get lost so much after This. It’s embarrassing

So eventually I got back and met Phil for food and beers, great day. Oh and the best cheese board ever and overnight parking at Swallow falls, £2 and can use the campsite showers 👍